Day Three began decidedly more smoothly for the young couple than the previous. Their excitement over what the day might bring stirred them awake and refreshed at an early hour. They hurried out of their hotel in search of coffee, knowing better than to begin another day without making caffeine a priority. They happened upon Café Reforma. Dave left Lee to figure out how to order a large nonfat vanilla latte on her own, a skill she would use on multiple subsequent occasions throughout their stay.

When planning the trip, they had mapped everything out. They researched public transportation options and to which destinations they could walk from their hotel. They had street maps printed on paper and downloaded to their phones. They felt prepared to maneuver the massive city.  However, after that first cab ride on the previous day, all of that mapping went out the window. Mexico City taxis were too cheap to pass up the convenience, especially for two travelers so ready to see as much as humanly possible in that short trip.

Having no set plan for their Saturday, the pair decided to begin with the exploration of Mercado de la Merced. They heard it was huge, and they were ready to throw themselves into the heart of it. A friendly and informative cab driver gave them a scenic tour of the market. He wound through block after block after block of booths. People were selling everything imaginable—shoes, clothes, posters, candies, toys, jewelry, pottery, utensils, pipes, CDs, religious trinkets, and FOOD. SO MUCH FOOD.

The cabbie dropped them along a line of seafood stands, where vendors shouted sales pitches at their potential new customers from behind their grills and vats of oil. Dave and Lee eventually stopped to enjoy ceviche, tacos, and micheladas at one of the less vocal stands. They rushed through their delicious but bizarre choice in breakfast, more than ready to explore the massive expanse of market.

The walk was near overwhelming. There was so much activity.  Between the sights, sounds, smells, and sheer number of people shouting, laughing, hustling, and bumping shoulders with the pair, it was stimulation overload. They continued on, not stopping for more than a beat here and there until they came upon Sonora Market. Lee had previously read about this market, but all of the things she had read could never have prepared her for all that she saw.

The couple entered tentatively but was immediately assaulted by the unapologetic nature of this market. Amidst unusual toys and traditional piñatas hung graphic and bloody Christs on crucifixes and figurines of demons and idols galore. 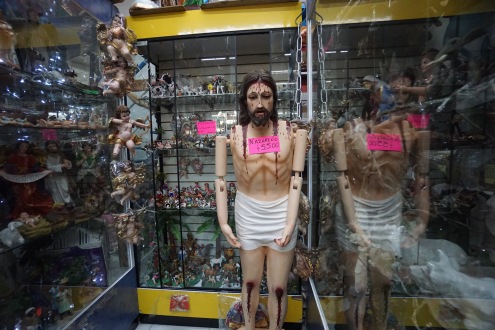 The couple walked deeper into the market in quiet fascination. They came upon a crate filled with sweet, sleepy puppies. They paused for a while, so Lee could spend time getting her puppy fix, holding as many of the fur balls as possible without accidentally taking one home.

Dave finally dragged Lee away, and they strolled through a series of other caged animals—rodents, chickens, and exotic birds—before happening upon the really good stuff.  There were bottles of magical potions and elixirs for every purpose from love spells to curses. There were soaps and candles boasting mythical properties. Enormous mounds of spices were labeled with their uses in both cooking and potion brewing. There were crudely formed figurines meant to ward off or bring in members of the spirit world. It was unique and surreal and wonderful and mildly disturbing. 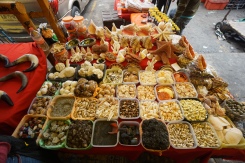 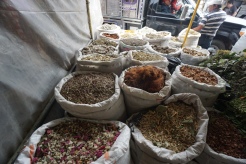 Life Tip #11: Grab a souvenir, but don’t make it your mission to bring trinkets home for loved ones. It’s your trip, so take A LOT of pictures to show off and hold dear, and then step away from the camera to delight in the experience.

By the time they left Mercado de la Merced, both Dave and Lee felt an odd combination of exhaustion and motivation. They were ready to take on the world, or at least, take on more of Mexico City. Dave wanted to look into seeing a fútbol match. He also wanted to see a Lucha Libre match, so they figured, why not both?

Life Tip #12: Research the hell out of where you’re headed, but don’t go overboard on agenda setting. Make a couple of plans and know when it’s beneficial to do certain things (i.e. free admission to museums on Sundays), but ultimately, do what you feel like when you feel like doing it.

After a quick and delicious bite to eat, they made their way back toward Zócalo, where they were told they would find what they need. There were significantly more people crowding the streets than the night prior. Costumed characters sprinkled the masses, offering photos for pesos.  A horde of teens inexplicably wielding signs of Justin Beiber and chanting his name marched down the center of the road. It was a mob scene.

After retrieving tickets to both events, they found time to wander. They noticed an expanse of open area and castle-like buildings in the distance and decided to investigate. When they cleared the block, they took in the true Zócalo—the massive open expanse of a town square showcasing an impressive Mexican flag, waving proudly in the breeze. It was framed by buildings that appeared important, rooftop restaurants, a literal palace, and a stunning cathedral. Dave and Lee were drawn toward the cathedral by sheer awe.

They entered alongside patrons and tourists, taking in the scene like something from a movie. It was quiet, tranquil, and vast. Each wall cradled several exposed but gated off nooks the size of dorm rooms, each appeared to be reserved for different saints. Some of these areas held space for sitting, others for kneeling. The great space in its nucleus was reserved for patrons, sitting in silent prayer or observance. The couple took their time absorbing the religious experience of it all, feeling grateful for the curiosity that led their feet in that direction. 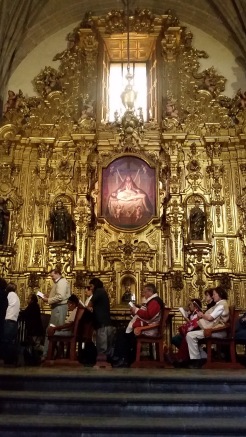 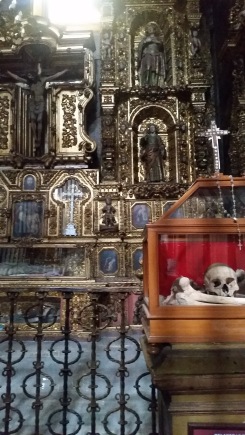 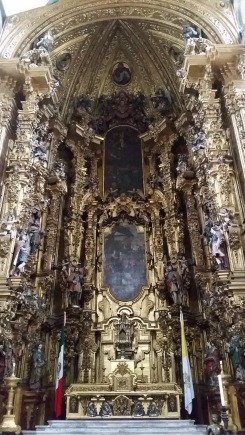 Later that afternoon, after stopping by the charming La Especial de Paris for tobacco flavored ice cream and chocolate flavored hot cocoa, Dave and Lee headed toward the fútbol stadium on the other side of town to watch Cruz Azul take on Monterrey.

If the teens at Zócalo were a mob, there was no word to describe the crowd at the fútbol match. It was absolute mayhem. Hundreds and hundreds of policía adorned in full riot gear lined the streets outside of the stadium, and hundreds more filled the halls of the inside. These men in uniform flanked the field with their shields up at the ready. The seats were sectioned off by chain link fencing and barbed wire, likely separating fans of the home team from those of the visitors. 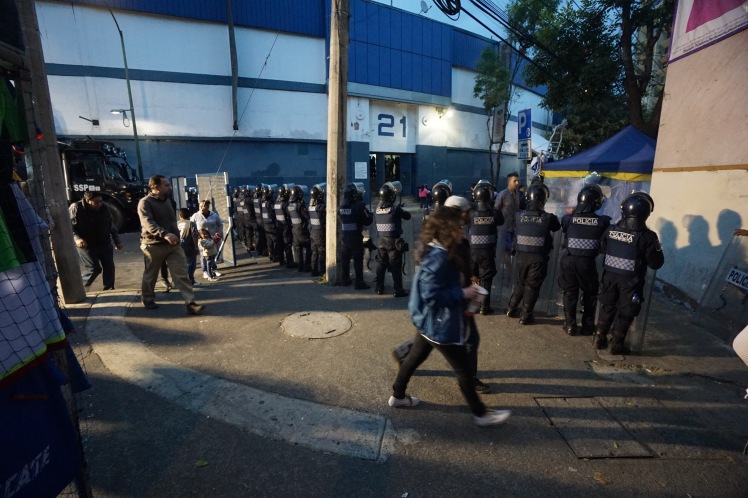 Cruz Azul scored four unanswered goals. At each goal, the crowd lost it. They threw their drinks and screamed with abandon. Feeling exhilarated and admittedly reluctant to leave early, Dave and Lee passed over the threshold of zealots and back into the safety of pseudo reality, but only for a short spell. After all, they had a different kind of madness-laden match to catch. So off they went, no turning back.

Lucha Libre took place in a small, old space off the beaten path near Zócalo. The small crowd of spectators was buzzing in anticipation of the match. Men, women, and children sported brightly colored masks. Vendors cruised the aisles selling popcorn, potato chips, and cups o’ noodles. A greying, pony-tailed man in a suit and bolo tie lounged in his seat in front of Lee. He seemed important, intimidating.

Lucha Libre was absurd on many levels. It was silly, raucous, and entertaining. There were multiple matches between different fighters that evening, each sporting a unique, colorful ensemble. They goaded each other and involved the crowd. They rolled around in the ring, oftentimes leaping from the ropes and “onto” their opponents, and occasionally took their fights outside of the ring all together. 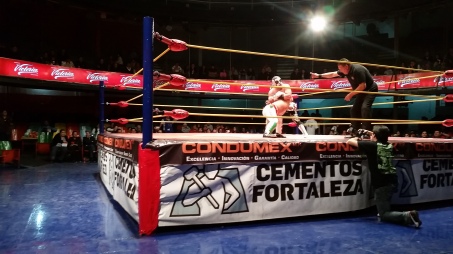 Lee and Dave left— curiosity satiated. They made their way out into the Mexico City night, ready to make one last pit stop before bed.

El Moro is a 24-hour/day hotspot for churros and chocolate in the City. It boasts a delicious taco cart out front, a consistent crowd regardless of the hour, and the best churros and hot chocolate Lee and Dave had ever had. The fast-moving waitress brought the couple’s treats with purpose, leaving them to enjoy before they could utter a gracias. Their spoils were beyond compare—Disneyland churros would never suffice again. There would be no point in ordering another hot chocolate. Nothing would satisfy the cravings left by El Moro. ‘Til we meet again.

Life Tip #13: If you find yourself in Mexico City, go to El Moro. You won’t regret it.

With another long and beautiful day behind them, Dave and Lee collapsed into a tangled, lazy heap on their hotel bed and quickly drifted off to sleep.