Life Tip #24: Be flexible. Life rarely goes according to plan.

Dave welcomed Lee home from Texas late on a Tuesday night. She went to work on Wednesday, packed that night, and by seven AM Thursday morning, the dynamic duo was out the door, heading for the border. They had planned to do what they had previously done on their journey Mexico City: Uber to CBX from Chula Vista.

The first thing they failed to account for was the fact of their massive bag of surfboards requiring a bit of extra legroom than the typical Uber might allow (Mishap #1). Their arrival in Chula Vista was met by crickets—no feasible Ubers, no accommodating Lyfts. Running behind schedule, they decided to pay the CBX daily rate for parking and headed in that general direction.

Unbeknownst to the still sleepy travelers, Google Maps had a taste for sabotage. Rather than directing them toward their destination on US soil, the app immediately led them across the border—to an unfamiliar crossing for the both of them (Mishap #2). The Border Patrol Officer was kind and apologetic but couldn’t help them turn back around without breaking all kinds of laws. The Sentri lane was out of the question at this crossing. They were screwed. Their only option? Park at the Tijuana airport and hope for the best. 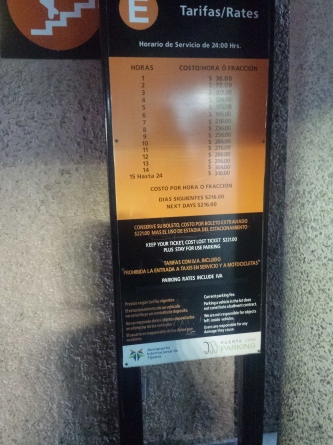 After a brief, bumpy journey filled with Dave’s grumblings and Lee’s words of fanciful optimism, they arrived at the airport. Parking proved to be incredibly easy. They were actually back on schedule, which proved to be more important than they had considered, as each individual was stopped by airline employees at separate points—Dave at check-in and Lee at TSA, if you’re curious.

Life Tip #25: If you’re comfortable with it (and have SENTRI or global entry), parking in TJ is even more cheap and convenient than using CBX.

Lee’s first taste of the season’s Pumpkin Spice Latte at the airport was a good omen. Dave was happy again, eating pancakes and talking animatedly about all of the waves they’d catch. The worst was behind them.

The first leg of their flight was good. They met a group of surfers from San Diego who had made their trips to La Saladita an annual thing. Their excitement was contagious. The short Mexico City layover was good. Their first beers of the trip were great. The puddle jumper that took them toward Ixtapa/Zihuantanejo was stellar because it got them there. 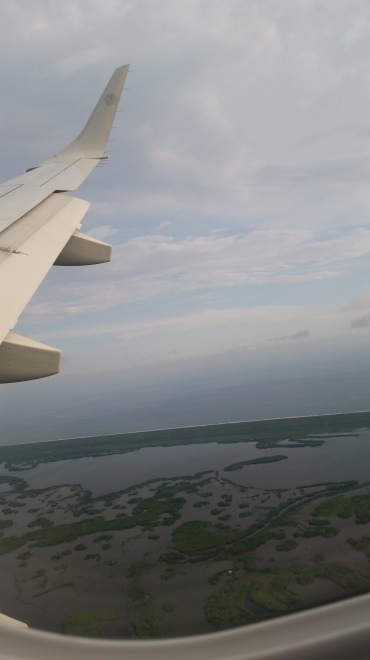 Mixed reviews and odd communication with rental car companies in their preliminary research led the couple to opt for public transportation, rather than a rental car on this trip (Mishap #3).

Life Tip #26: If your destination is touristy and public transportation is a big question mark, just get the rental car.

Wheeling and dealing with an airport van driver did nothing for the couple. They overpaid, and he took them only as far as the touristy part of Ixtapa. The problem was, they were staying in Troncones, which was, of course, an additional 30 or so kilometers away.

They flagged down a taxi, and negotiated him down from 450 to 300 pesos and, half an hour later, arrived at Roberto’s Bistro. Roberto’s was a site to behold—an outdoor restaurant adjacent to six simple rooms nestled in the sand with ocean views obstructed only by a turtle egg sanctuary, manned by three knowledgeable teenaged boys. 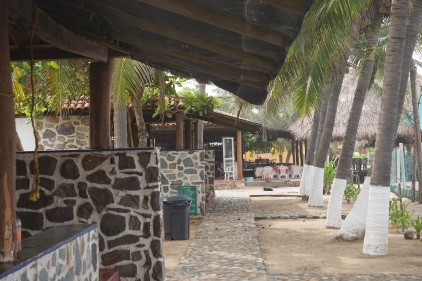 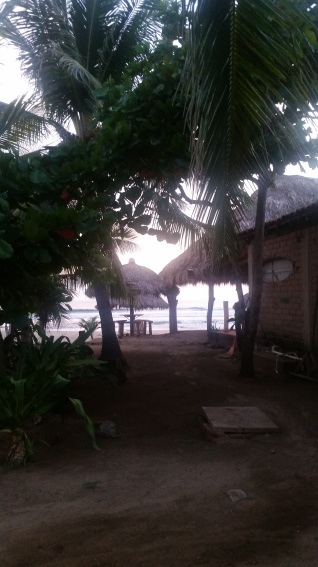 A smiling bartender took them to their room without a word, assuming rather than asking who they were. The moment the door shut behind them, the couple changed into bathing suits like their lives depended on it. They sprinted into the warm embrace of the ocean, a pink sunset providing the best kind of backdrop to a decidedly long day. After kicking a few shallow, sharp masses of reef, they decided to float. Tomorrow, they’d find a less perilous beach to take their fragile surfboards. 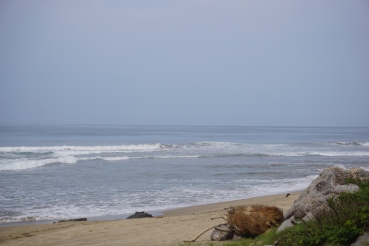 So after a delicious dinner at Roberto’s Bistro with a stray old dog playing the role of third wheel, they went to bed and promptly turned into lobsters, boiling in their air conditioning-free room. They woke with the dawn, neither having slept well, but they were still happy to be in a tropical paradise.

They took a long shoreline walk north, finding themselves resting on the benches of a drooping wooden table in front of a steakhouse. In the quiet of the morning, they weren’t expecting to see anyone but stray pups and dawn patrollers, but they were quickly greeted with coffee by a jovial waiter. They enjoyed a delicious breakfast of chilaquiles and huevos a la Mexicana and watched surfers battle for junky waves.

They walked through the quiet town back to Roberto’s, 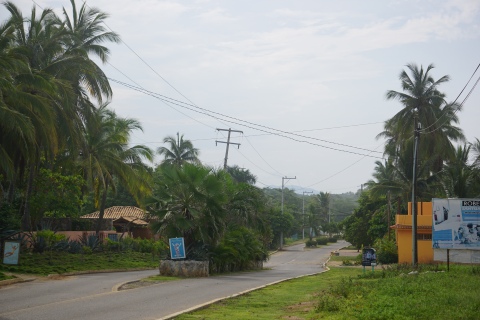 they decided their mission for the day would be to find good waves. A crooked taxi driver by
the name of Carlos picked them up from their hotel and took them to La Saladita, where waves were supposed to be nice and mellow and perfect for Lee. Upon arrival at their destination, Carlos proceeded to swindle them into a round trip price of way too many pesos (Mishap #4). The couple decided they would invest in a rental car the next day. 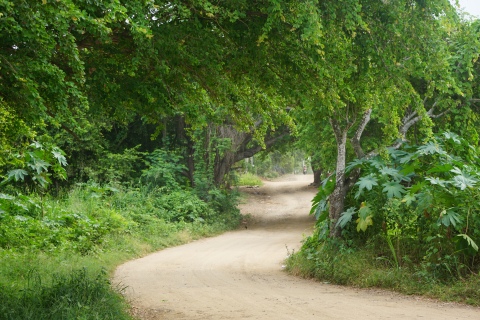 They made the long paddle out over a vast expanse of reef at La Saladita to meet the longest lefts they would ever know. They basked in the beautiful sensation of warm ocean water underneath a brilliantly shining sun. Sea turtles joined in their adventure with heads breaking through the water at random intervals. They celebrated every wave taken, and when they were too tired to paddle back out again, they settled onto the patio at Lourdes Restaurant for several fresh piña coladas. 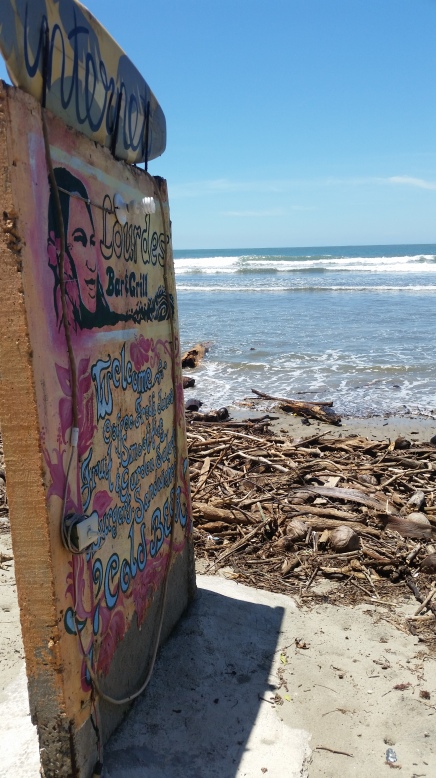 Carlos drove them in uncomfortable silence back to Roberto’s Bistro, where they quickly paid the man and resisted the urge to give him the middle finger.

After an additional evening of boiling like lobsters in the semi-comfort of their mosquito-net wrapped hotel bed, the couple awoke with a mission. They would retrieve a rental car from Zihuantanejo, one of the main towns, and move on with their lives.

2 thoughts on “Seeking Tranquility in Troncones”