I’m proud to say that in the God knows how many flights I’ve enjoyed in my lifetime, I have never missed one. Have I ran through the airport to catch a flight before takeoff? On several occasions. Fortunately, to this day, I can still say I’ve never missed a flight, but as of this past Thursday, I can say I’ve missed a boat. I can also say, f*ck LA traffic. Prepare for a lot of life tips, for this trip to Channel Islands was a learning experience.

Our alarms simultaneously attempted to bring life to the miserable hour of 4 AM. Dave rolled out of bed immediately. I groaned audibly and turned over for five (ten) more minutes. We had stayed up well past my bedtime the night prior doing everything we could to prepare and pack for our big camping trip. I made breakfast burritos, prepared cold pizza, and packed the cooler. Dave packed the gear. His roommate, F, took care of the rest of the prep.

We three met B in the parking garage at 4:40, where we packed his old SUV tightly with enough gear to eliminate any sort of visibility out the back. After a quick stop at McDonalds and a gas station, we were on our way. Without traffic, the trip would take 2 hours and 40 minutes. With traffic, we arrived in Ventura at 10 AM. The boat (our boat,  the last and only boat) had left an hour prior, sans six passengers. Our other friends, M and C had left even later than us. 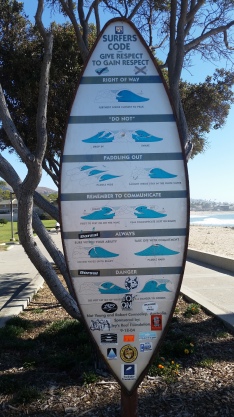 Life Tip #30: Los Angeles is Latin for hours of your life disappearing into a vast abyss of brake
lights. Plan your commute accordingly, and then head out an additional hour before that.

The four of us waited at the beach for the two laggers behind. We played with rock formations, contemplated renting surfboards, and ultimately found ourselves sulking into cocktails at Red Cove, the only bar open in Ventura before noon. Our crappy morning was met by an intensely crabby old bartender. It wasn’t until a spunky young bartendress began her shift that our day began to turn around. C found us a hotel overlooking the Marina for the night. There was no way we would miss our rescheduled boat the following day.

Life Tip #31: Use hotwire.com when you’re in a bind. It can provide nice, inexpensive, and welcome shelter in the clutch. The surprise element after purchase is also an unexpected source of excitement.

After dropping our belongings off in our adjacent rooms and finding that much of the food we had prepared and packed was destroyed by cooler water, we decided to make lemonade. We spent time at the pool and ran fun errands to Big 5 and Target. We ventured into downtown Ventura, which proved to be a charming town. We drank margaritas and ate tacos underneath the bra-adorned chandeliers of El Rey Cantina. C and I admired the thoughtful graffiti on the hot pink bathroom walls. We ended the night in the hotel Jacuzzi and slept in the unreasonably comfortable beds at the Sheraton.

The morning was all business with a wake up call from hotel reception, quick and thorough packing, and even quicker PB&Js. At 9 AM, we were waving goodbye to Ventura’s marina and venturing out on the Pacific toward Santa Cruz Island. Unexpected detour complete. 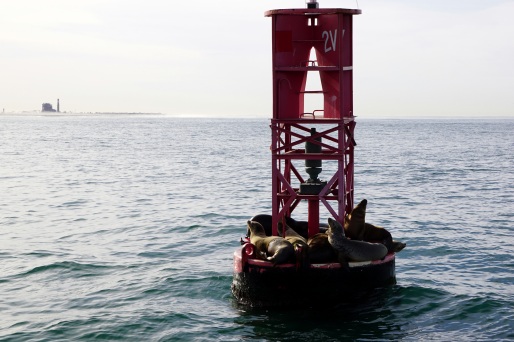 The boat ride was nice and easy. We even got to see three rescued seals be released back into the wild sea. 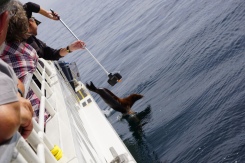 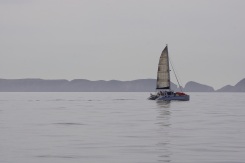 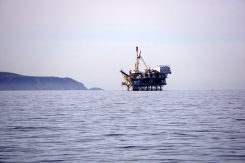 Getting to the campsite from the boat should have been easy. We only packed items we could carry in one trip. And the campgrounds were maybe a half a mile walk, but of course, within the first stretch of rocky dirt path, the wheels of the very full and heavy cooler came off. Needless to say, the walk was trying.

Finally, we were able to set up camp. We settled in with sandwiches and bug spray. Bees and wasps buzzed beneath the only drinking water source the campsite had to offer, but that was only a minor inconvenience compared to the gnats. Gnats were everywhere, numbers in the trillions.

At least there was wine. Before the trip, Dave had convinced me to go against everything I thought I stood for in favor of a lighter pack. He talked me into the purchase of my first box of wine (And I’m not talking box filled with 12 bottles of wine. I’d been there, done that countless times before.). I had tried Franzia in the past. Boxed wine wasn’t for me, but my gosh I was wrong in my reluctance to a box of wine for camping (And who knows? Perhaps it might even be appropriate in other settings?). Though I still am reluctant to revisit Franzia, I can confidently say that my Black Box of Sauvignon Blanc was a blessing to a decidedly rough trip.

Life Tip #33: Don’t be that person that says you don’t like something you have yet to taste (within reason). If you hate it, then at least your hate is justified with experience. If you like it, then you’ve learned something new about yourself and have discovered a new source of life’s pleasures.

It was well past noon when Dave suggested a hike to Smugglers Cove. He was ready to hunt down lobster and settle into what the trip was supposed to be – fun, stress-free, and filled with lobsters that he would catch with his bare hands. We stored everything away tightly in the fox box and our tents to prevent one of the island’s hundreds of foxes and ravens from ravaging our supplies and to keep the adorable yet evidently evil foxes from marking their territory on our belongings. 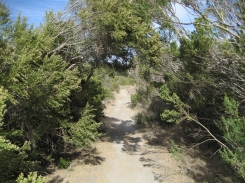 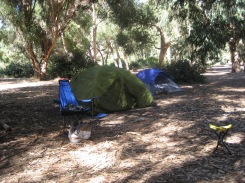 F and I joined Dave on the hike, while the others opted for a shorter walk. The three of us were strolling along the path we believed to be correct when a serviceman let us know we were in for quite a trek. We weren’t heading on the trail with which he was familiar, but upon handing us a map, we decided we might as well continue in our same general direction. The trail was steep and long. Very long. Longer than expected. The apex of each hill only introduced a new apex. 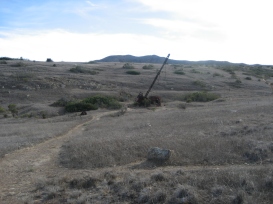 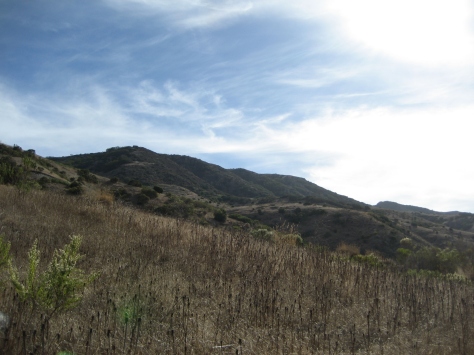 Life Tip # 34: Find a physical activity or two that you enjoy, and then actually do it with some consistency. Exercise, while not always convenient, does make life easier.

By the time we began our descent toward Smugglers, the sun was sinking low in the sky. The boys quickly changed into wetsuits, grabbed their snorkels, and ventured over the rocky terrain into the too cold waters. I sat on a picnic bench and watched the absurdly beautiful sunset begin, while constantly swatting away the ever-present gnats from my feet and face. 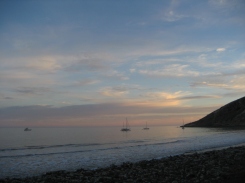 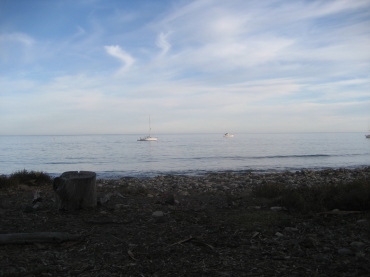 Eventually, I spotted the boys hobbling painfully along a very long stretch of rocks from a distant cove. I met them halfway with their shoes and shorts for the sake of moving the process along. We were running out of daylight fast. By the time we finally made it back to camp, it was dark, and our friends were minutes away from alerting the ranger of our absence.

We ate dinner at the picnic table by moth-infested lantern light. Fires are a big no-no at Channel Islands. Finally, we laid down to rest, exhausted and blistered but not longer dehydrated or hungry.

After breakfast, we decided it would be a good day for a good kayaking. The only problem was that there were only two kayaks, and there were six people. We decided that Dave and I would tow a kicking F behind us, and C and M could take B in the same fashion.

When B stepped away to answer nature’s call, C and M rowed away without a word. It would be up to Dave and I to figure out how to tow two grown men toward our intended snorkeling/lobstering spot without capsizing or loss of limb.

F, the smaller and more limber of the two, balled up on the small platform at the front of the kayak. I rowed behind him, Dave behind me, and B kicked his fins mercilessly in the chilly water. In an area thick with kelp along the way, we encountered a solo traveler from Switzerland. We invited her to join our unconventional caravan, and she gladly accepted the role of second kicker.

Leaving the others to snorkel and check one area for lobster, Dave and I wandered elsewhere to find lobster and to find C and M. The initial row out was challenging enough with the extra weight. We weren’t interested in repeating the experience without lightening our load by at least one body.

The snorkelers, now chilled to the bone, decided to all hitch a ride back to shore with C and M. Unfortunately for B and F, C and M decided the weight was too much to bear and forced them to swim to shore without a tow. The Swiss tourist remained seated at the bow of their boat with inexperienced feet dragging in the water.

Dave and I were still at the cove. He gave me my first taste of fresh uni, which I truly disliked – texture, aftertaste, and all. This was a disappointment. Dave, who had worked at a Japanese restaurant in his younger years, consistently and fondly spoke uni’s praises in the 2+ years since we’d met and shipped. I was grateful to know the taste, but I spent a good bout of time wishing for either toothpaste or whiskey after the fact. After getting the bad taste out of my mouth, we looked for lobsters (and failed) and enjoyed the beauty of life beneath the ocean’s surface, and all the while expected B and F to come back with the other kayak for the sake of more fun in the sun. F eventually rowed back out to us, but not before the late afternoon arrived and inevitable hunger struck.

After snacking on hot dogs and mac n cheese, we campers decided to take a little hike toward sunset. It was breathtaking and romantic and only slightly possessing the feel of fall. 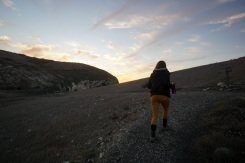 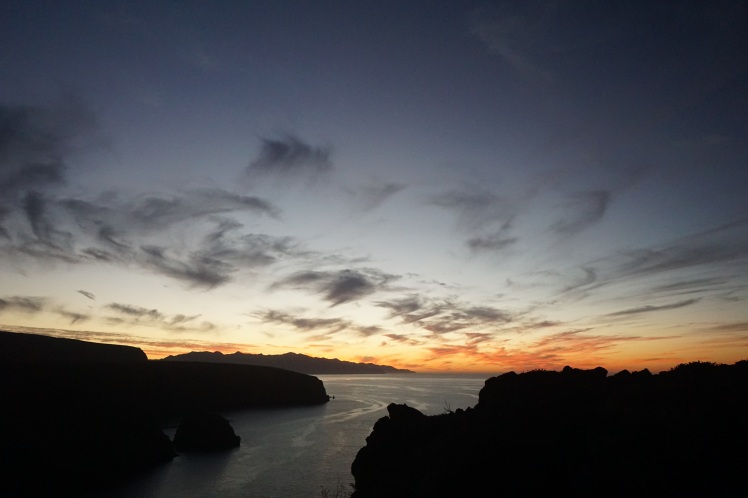 Our last night was spent with Baileys, hot cocoa, and stargazing. 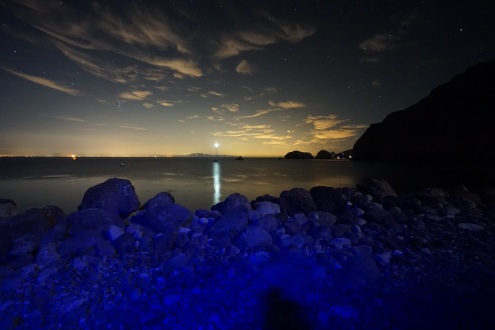 It was a slow-to-start kind of morning. We drank our usual cups of instant coffee, batted away the gnats, and tried to cook up the last of our perishable food, which wasn’t all that challenging after the cooler incident of Day 1. We packed up camp and lounged on the beach to the tune of Dave strumming the guitar. I snapped photos, and our friends talked animatedly about everything and nothing.

A lengthy boarding process took us back to the boat that had once left without us and also brought us to such an interesting place. An hour’s slash-filled boat ride later, and we were back on the mainland, unloading luggage in human train fashion and feeling slightly worse for wear.

A sleepy three-something hour car ride brought us back to San Diego, and a ten minute conversation brought us to the conclusion that maybe an attempted three night, six person stay at Channel Islands from San Diego was slightly ambitious.

We’ll always remember the boat… And the gnats… And the boxed wine… And the lack of lobster… And the sunsets.

7 thoughts on “Challenges at Channel Islands”